It’s a headache most parents will get at some point.  You buy your child this amazing new toy. Maybe it’s even something they’ve been on about for ages.  They take one look at it and either abandon it completely, or play with it for only five minutes. Then they are off to something else, leaving you feeling a bit frustrated.

But are there ways to stop kids from getting bored with their toys?  The answer is yes and here are five examples.

Why kids might get bored with their toys so quickly

Before diving into those tips, let’s take a moment to consider why kids get bored so quickly with toys.  There are three common reasons:

Reason #1: Maybe it is too far ahead of their development level.

A toy might seem perfect for them, or you might see it being advertised as a great toy. However, once they start playing with it, you realize it is too far ahead of their development level.  This will cause them to abandon it, because they just don’t get how to enjoy it.

Want to learn more about what toys and activities are appropriate for your toddlers’ developmental level? Click this link to download my FREE guide to 45 Toddler Activities.

Reason #2: Something else has caught their attention (like the cardboard box the toy came in!).

Have you ever spent good money on what you thought was a great toy, only to find that your toddler is more interested in the box or the wrapper? A toy is a fascinating thing, but so is the cardboard box it came in!  Sometimes they get sidetracked by something else, relating to the toy. It’s also possible that they just aren’t ready to play with the new item yet.

Reason #3: They are more interested in what is going on around them.

Ever tried using a toy to keep them occupied while you are doing something (that seems boring to you – like folding laundry or sweeping the floor)? Nine times out of ten, it probably didn’t work.

I’ll bet that for your toddler, that broom or the laundry was more interesting than the new flashy expensive toy! That’s because it’s what YOU are doing. Your toddler wants to be in the middle of where the “action” is.

How to stop kids from getting bored with their toys

That doesn’t mean you should admit defeat if they don’t play with new toys or get bored quickly.  Here are five ways to try to reengage them and get them into that new item.

For the kid who is still engrossed with another toy, show them how the two things could go together. Even if in our adult minds, they don’t! The key is to show the new toy as connected to their favorite.

Your child may also do this on his own. If this happens, you don’t need to stop him. This is where his creativity comes in! Sometimes, we read that we should train a child to pack a way a toy properly before getting another one. I tried doing this with my child, and I found that he enjoyed combining his toys. He would play with the peg people and the blocks together. He also pretended that the blocks were “rocks” in a construction truck. There is no limit to a young child’s imagination!

For more on this, and other myths on learning through play, read this article.

As long as there’s nothing dangerous in what they are doing, let them play with the toy as they see fit.  That includes incorporating the cardboard box into the games too. The best play is creative and versatile.

However, it is not just the toy, but how it is used. Any toy can be used in multiple ways. So your child received a toy giraffe with musical buttons that light up? Don’t dismiss this as a toy that “kills your child’s creativity”! Remove the batteries and pretend it is a talking giraffe. Put in in a “zoo” – a cardboard box with a stuffed animal and a few peg people. The possibilities are endless.

Sometimes you need to inspire them to play with a toy by making it part of a story.  This helps them imagine how to play with it and engages them. Before you know it, they’ll be making up their own stories too. A great bonus of this is you also develop their language skills. At this age, the best learning comes through play, and this is a fun way to do it.

Similarly, if you ‘play’ with the toy and then bring them into what you are doing, you can show them the joy of the new item.

Feeling stuck thinking of how to do this? Download this FREE guide to toddler activities for ideas to get you started!

While you don’t want to throw anything out, removing some options from sight can also help them stay focused on something. Young kids can get overwhelmed when there are too many options. If there’s nothing else to grab their attention, they often won’t think to bounce to a different toy.

Don’t get stressed about it!

Finally, it is important not to get stressed about it when your kid either ignores a toy or gets bored with it in no time.  It is natural for them to play with different things. So use the tips above.

You can also put the toy to one side for a while. Keep it hidden in the meantime. Put it out of “toy rotation”. I can’t count the number of times that my toddler didn’t mind a toy before, then when he saw it again a month or two later, it suddenly became his favorite toy.

If all else fails, you can pass it on to another child who has shown interest in it or to a charitable organization that accepts used toys.

Get 45 things you can do right now to boost your child's brain development.
A FREE guide brought to you by a developmental and behavioral pediatrician and toddler mom.
This also signs you up to receive helpful toddler parenting tips delivered right to your inbox. 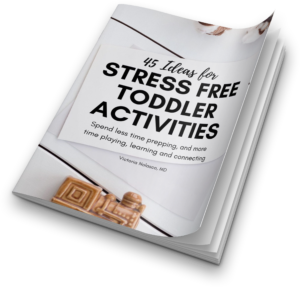 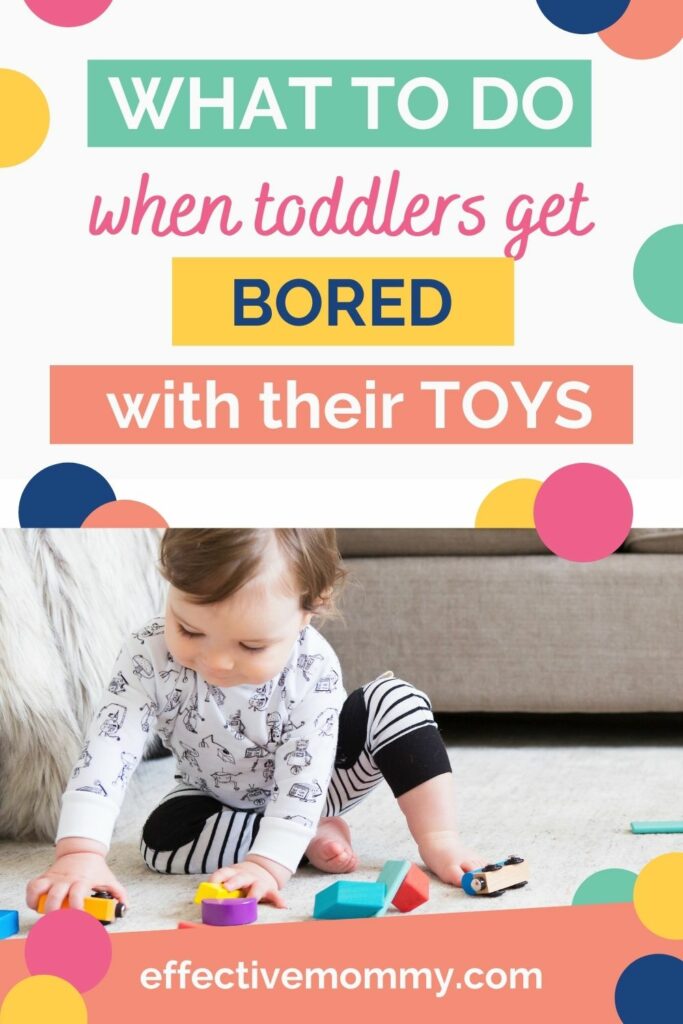 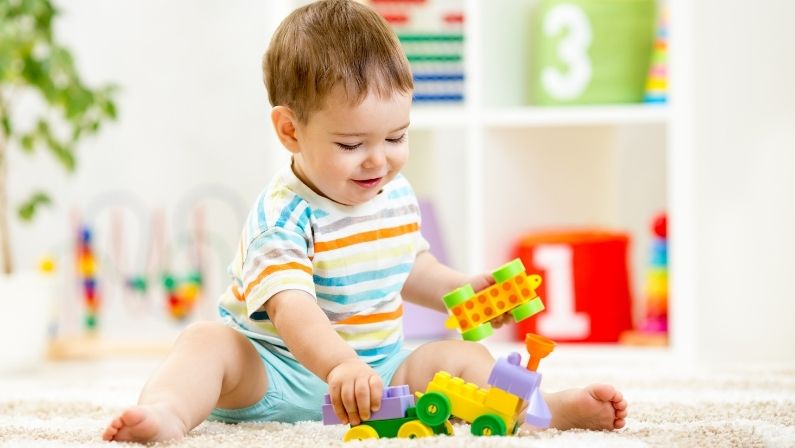 Has this happened to you? You Google “activities for toddlers” or look it up on Pinterest. You see hundreds – maybe even thousands – of beautiful and interesting looking activities. They use nice keywords like “sensory play” or “brain development”. You download a few of them and look at the instructions. There’s a list of… 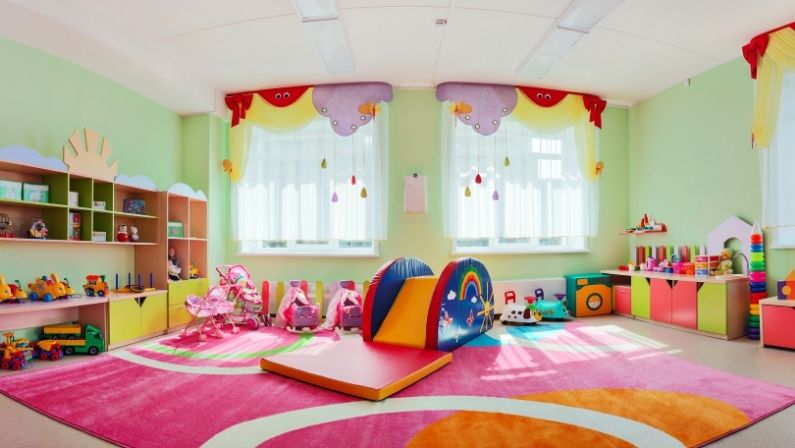 There are so many myths about learning through play. These myths are so common, that moms may take it for granted that they are true. Why do I want to correct these myths on play? First, they cause a lot of stress and guilt for moms. Many moms I know read articles saying these things,… 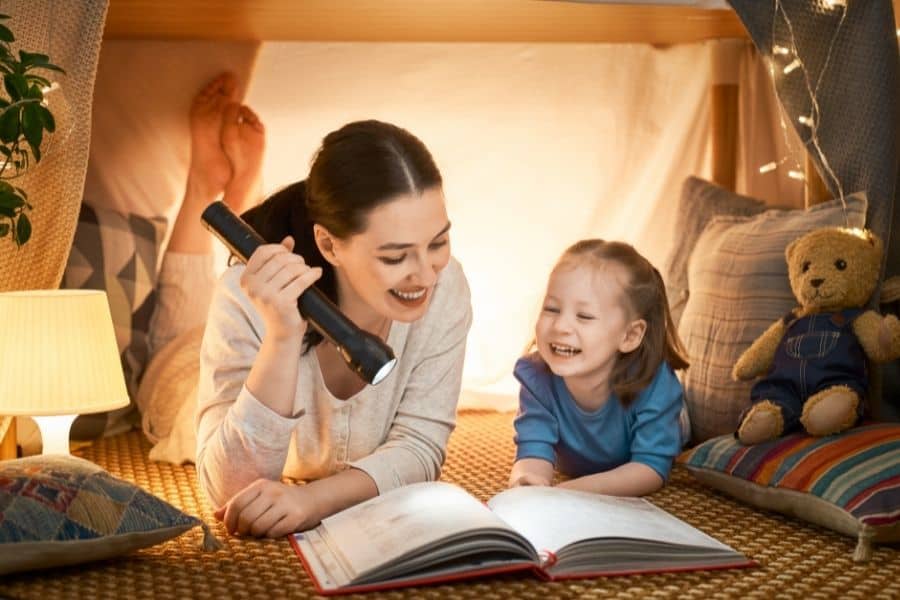 One of the most common parenting advice that we often hear is how important it is to maintain a consistent bedtime routine for our kids. Experts recommend that routines should be established as early as possible to help kids create a connection between routines and falling asleep.  But… that’s easier said than done!  Getting toddlers… 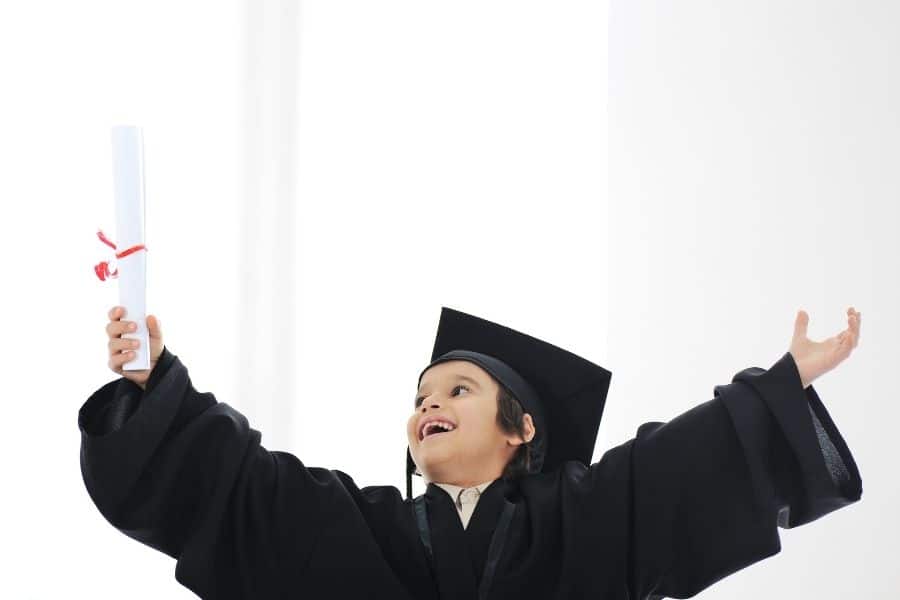 To raise successful kids, focus on exploration and EQ – not IQ Written by Jaclyn Lutanco-Chua, interview conducted by Victoria Ang-Nolasco, MD All parents want their toddlers to grow up and do amazing things with their lives. But how do we help our kids achieve success? Is it… enrolling our children in the most prestigious… 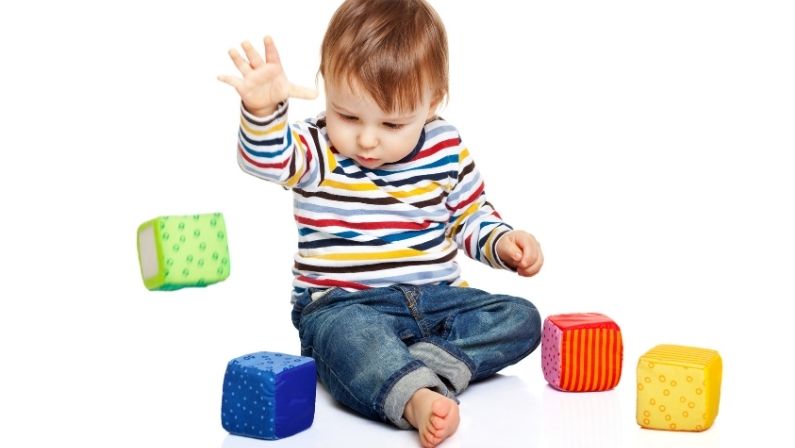 If wondering why your toddler loves to throw toys instead of playing with them, you’re not alone. This is very common toddler behavior. We’ve all been there. You hand your toddler a gorgeous new toy to play with. Instantly, she pitches it to the floor like it was a hot potato. You sit there, frustrated,… 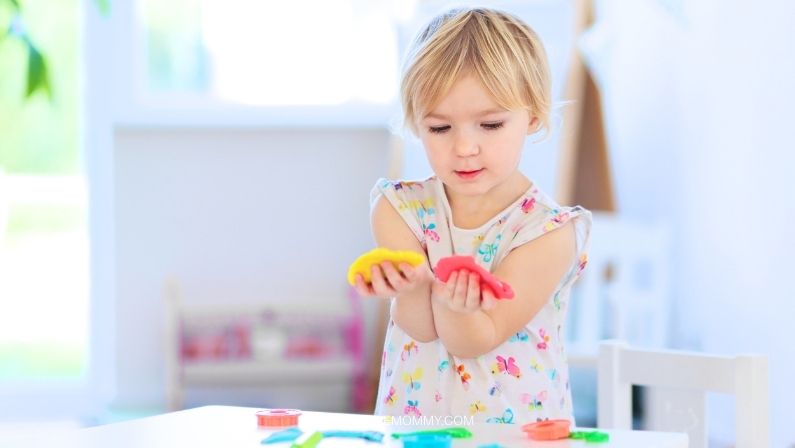 Have you been wondering how to implement learning through play at home for your toddler? Or at a loss for activity ideas, or what toys to buy? You’re in the right place. Below you will find some key tips to help your little one learn through play during the toddler years. Remember to keep playtime…

“Toddler Talking” is now available on Amazon! Get it now. 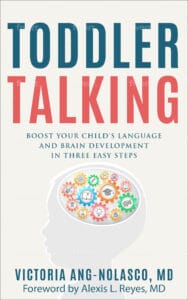 What are you focusing on today?

Get 45 things you can do right now to boost your child's brain development.
A FREE guide brought to you by a developmental and behavioral pediatrician and toddler mom.
This also signs you up to receive helpful toddler parenting tips delivered right to your inbox.

This website uses cookies to improve your experience while you navigate through the website. Out of these, the cookies that are categorized as necessary are stored on your browser as they are essential for the working of basic functionalities of the website. We also use third-party cookies that help us analyze and understand how you use this website. These cookies will be stored in your browser only with your consent. You also have the option to opt-out of these cookies. But opting out of some of these cookies may affect your browsing experience.
Necessary Always Enabled
Necessary cookies are absolutely essential for the website to function properly. This category only includes cookies that ensures basic functionalities and security features of the website. These cookies do not store any personal information.
Non-necessary
Any cookies that may not be particularly necessary for the website to function and is used specifically to collect user personal data via analytics, ads, other embedded contents are termed as non-necessary cookies. It is mandatory to procure user consent prior to running these cookies on your website.
SAVE & ACCEPT